Growing up in the late eighties/early nineties, there was one thing I loved:  Teenage Mutant Ninja Turtles.  Okay, so I loved other things, too, but Saturday Mornings were special.  I was just a sucker for the shows that broadcasters just knew would keep our little imaginations running.  It wasn’t just my childhood that was shaped by this type of programming block, however – Wikipedia has a page dedicated to the history and strategy behind the Saturday Morning Cartoon!  What’s more, as explained by John Cheese of Cracked.com, this kind of TV-By-Theme, like Cartoon Network’s “Toonami” and Nickelodeon’s “Nicktoons,” are being phased out as on-demand programming, DVR’s, and hundred-channel-TV-Services allow consumers to more exactingly choose their shows.

That’s right!  Soon, if not already, the Saturday Morning Cartoon will disappear into a world where it takes a parental supervision code to turn on anything besides The Disney Chan…Wait.  No, Disney might not be the best choice-of-channel, given how many of their actors go over to the dark side.

Miley Cyrus, everyone. Courtesy of Hypedentertainment.com

I’m not just here to wax poetic about the old days, however.  Nostalgia has its place in the world (And, of course, its critics), but I’m here to ask a bigger question:  Did the Saturday Morning Cartoon teach children an actually valuable lesson in life?

No, I’m not talking about those goddamned, miserable goat fucks called “The More You Know,” or maybe “Some-Character-Maybe-Named-Sonic Says,” or whatever the poorly-named attempt to inform us was.  I certainly don’t mean those horrible anti-drug PSAs that tried to terrify us into not doing what most of us ended up at least trying.  I mean something more simple in life:  The concept of the opportunity cost.

What it costs to do what we want.  With TV’s.

As John Cheese pointed out in his article (cited above), we kids had to make choices about how we watched our cartoons.  At the very least, as he pointed out, we had to choose to get up.  Maybe we wanted to sleep in that Saturday, because the week had been tough!  Already we’d made a trade-off:  Sleep for TV.  Sometimes, if two cartoons we liked were on at the same time, we’d have to decide which one we cared more about!  Unless, of course, we were rich enough to have another TV with a VCR attached, and could record the other one; more likely, we could have a friend record it, if such a friend was reliable!

Speaking of friends, here’s another question:  If we were having a sleep-over, who decided what got watched, when?  What about when we were at that really cool friend’s house, and by cool I mean that friend who had a Nintendo with lots of games?  Did we watch still our TV show, or did we play some NES?  What if we’d rented a video game, but it really sucked?  Did you keep playing, hoping to get your money’s worth, or did you give up?

Oh, and speaking of not being able to actually watch our favorite shows, how about the worst situation of all?  How about when it was up to our parents what we did?  How the hell, looking back on it, did we cope with having to get up and go to sports practice/the zoo/some parental function we didn’t want anything to do with?  “But I want to watch…” was about as far as that debate got, right?

The Value of Time Management.

Well, therein lies the real value of the Saturday Morning Cartoon.  Sure, they made convenient TV fodder for when Grandpa and Grandma got stuck watching the brat so that Mommy and Daddy could have their “time alone.”  Sure, this type of programming probably didn’t set out teach us very much about anything real in our lives.  However, as adults, we all too often find ourselves facing similar issues of time management.  They are vital, and they keep us up at night wondering what the right choices are.  These are the issues that being addicted to Saturday morning cartoons prepared us for. 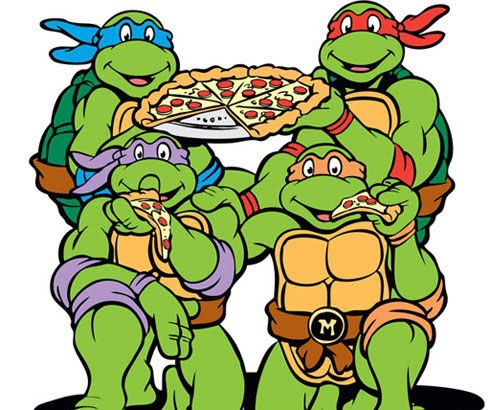 More food while your brain rots in front of that box? Image courtesy of Scarydad.com